In the week leading up to St Patrick’s Day, the Thomas Francis Meagher Foundation again supported secondary schools throughout the country by providing ‘Flag Week’ fundraising packs to include lapel badges and other materials so that they could initiate their own fundraising campaigns for their chosen good cause, and to support the work of Ceann Comhairle Sean O Feargail’s Trocaire project in northern Ethiopia. The Thomas F. Meagher Foundation was established to promote pride in and respect for the Irish Flag and its meaning for peace by encouraging the young people of Ireland, irrespective of ethnicity, creed or gender, to work together under the Irish Tricolour to proclaim and live its message of peace and unity and celebrate the new broader inclusive definition of Irishness. Schools were also invited to produce a video of their Flag Week activities supporting the Foundations message.

Writing in the Irish Independent’s recent supplement ‘The People’s Flag’, Foundation Chair Revd. Michael Cavanagh, P-in-C of the Kenmare and Dromod Union, described the work of the Foundation and its vision:

A flag for Ireland

On 7 March 1848, Thomas Meagher raised the colours of Green, Orange and White – flying the Tricolour that is now our National Flag. His dream was that “Beneath its folds the hands of the Irish Catholic and the Irish Protestant may be clasped in generous and heroic brotherhood.” The purpose of the Thomas F Meagher Foundation is to help and support that dream, and the dreams of all who have followed his example. Today, the symbolism of the Tricolour speaks louder than ever – not now constrained by religious belief, but encompassing all the people of Ireland, whatever their creed, culture, ethnicity or gender.

Irish influence has reached far beyond its shores – wherever we travel, Irish songs and poetry are heard; Irish values of welcome and hospitality are proclaimed; and the history of the Irish struggle for freedom gives inspiration to those still suffering oppression and foreign control. But we cannot be a country living on the stories of its past, neither can we allow the external pressures of a world of increasing commercialisation and self-centredness to dictate how we live our lives, turning the sparkling colours of the Tricolour into a dull and uniform greyness.

Throughout 2016, we commemorated those who, throughout the last century – and for many years before – fought and gave their lives to claim the independence which is the birthright of Irishmen and Irishwomen. The world in which we live has changed much over the years, but the aspiration is the same. In the Ireland of the 21st century, we seek equality and justice; respect between those of many different faiths and none; an end to prejudice of whatever kind; and most importantly, a country in which our children and our children’s children can grow in body, mind and spirit, learning from each other and contributing to their local, national and international communities. Our flag now symbolises a broader and more inclusive view of citizenship between the all the New Irish – a wonderful kaleidoscope of people who offer both traditional and new contributions to our national heritage.

As part of the 2016 Commemorations, and in partnership with Government and the Defence Services, the Thomas Meagher Foundation presented schools throughout the country with an Irish flag that had been flown from 33 The Mall, Waterford – from where Meagher had raised the first Tricolour. Later in the year, students across the country read from the 1916 Proclamation – and one of the most moving aspects of both events was that they brought young people from many different birth nations together under the Green Orange and White, emphasising the message of togetherness of which those colours are a lasting symbol, and oblivious to any difference between them. As schools across the country raise money for charities of their choice on Flag Day 2017, they bring alive the Tricolour’s message of Pride, Respect and Peace – Mórtas, Meas agus Síocháin.

Meagher once said that ‘A National flag is the most sacred thing a nation can possess’. The central white panel proclaims our desire for a lasting peace and unity within our Nation – a truly sacred hope – and while we have come far, the ideals of the Proclamation – ideals of Equality Respect and Peace – have still to be fully realised. Bringing them to reality is down to us. We are those now living in the time to be, and its terrible beauty is ours to nourish and to grow.

Priest-in-charge of the Kenmare & Dromod Union, Chair of the Thomas Meagher Foundation 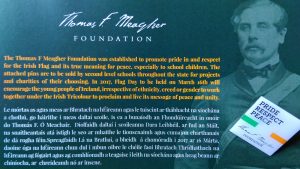