It is a delight again to address this meeting of our Diocesan Synod, to mark changes which have happened over the year, but above all to look to the future as a confident diocese, one which certainly has challenges, but a diocese which is clearly up to the task of facing those challenges with confidence that this is God’s church and the future lies with God.

I can’t begin without acknowledging the recent death of Bishop Donald Caird, Bishop of Limerick from 1970 – 1976, and the last bishop of Limerick before its union with the Diocese of Killaloe. A great scholar, a devotee of the Irish language, and a truly kind and gentle bishop. He looked back with warmth and affection on his time in Limerick, which he often said were some of the happiest times for himself and his family. While bishop here he bought a holiday house near Camp in Co Kerry and returned there year after year – his family still use it. “Ar dheis De go raibh a anam dilis.”

During the year we welcomed Revd Rod Smyth to Nenagh Group of Parishes, Canon Patrick Comerford to Rathkeale Group of Parishes and to a wider education role within the diocese, and Revd Jim Stephens who has transferred to stipendiary ministry to take charge of Tralee Group. Each of these people bring distinctive gifts and testify to the ongoing renewal of ordained ministry in the diocese.

During the year we also formed a Guild of Diocesan Lay Readers, and four more readers were licenced, two from within the diocese, Mrs Norma Jean Carney and Jerome Phair, and Dr Steven Ellis from Tuam and Stephen Fletcher from St Alban’s diocese in the Church of England. I want to say something about our diocesan Lay Readers who are crucial to our parish ministry in this diocese. Far too long lay readers were seen as people who “filled in” when no priest was available. That is no longer the case. Lay readers are colleagues in ministry alongside ordained ministers, with a ministry that is equally valid and have a place in our diocesan life at least as important with respect to Sunday ministry.

What is our current situation with respect to ordained ministry? The church as a whole on this island doesn’t have as many clergy as before, but we don’t really have a shortage of clergy. What we are facing in many places, and I think in this diocese, is a shortage of money to sustain full-time clergy. Clergy stipends are not large, but when you add in travel allowances, the cost of a rectory and so on it can amount to a substantial burden to the parish and diocese.

Non-Stipendiary ministry has been a form of ministry well suited to a diocese like ours, but because of changes in the patterns of training, that source of clergy is fast disappearing. We benefit greatly from part-time clergy, but for some reason not many clergy choose that option, and so prove difficult to find.

So how do we respond?

I want as a Synod to think for a moment about the ministry of lay readers, and whether you or someone you know might wish to explore this ministry. As I said, we now have a Guild of Lay Readers, and some of its members are here in Synod. I wonder if I could ask those of you who are Lay Readers in the diocese to stand. If anyone is interested in exploring the possibility of serving as a lay reader perhaps you might like to talk to one of them over lunch and see what’s involved. Some readers, Audrey Clarke Gordon, Dr John Jarvis, Joc Sanders and Andrew Eadie are happy to discuss the process, or perhaps you should talk to either of the Wardens of Readers – Archdeacon Carney or Canon Liz Beasley.

As we look to the future, we will see an increasingly complex picture for ministry – full-time clergy, part-time clergy, lay readers, and various other forms of lay ministry, not lay people undertaking “clergy” roles, but lay people discovering their own roles in the life of the church.

A new form of ordained ministry will make its appearance over the next year or so – Ordained Local Ministry (OLM). General Synod has now approved the introduction of this form of ministry, and selection is likely to begin next year, in 2018. OLM’s will be different from non-stipendiary ministers because their primary commitment will be to the parish, not the diocese. Their selection will be supported by their parish to meet a clear need, and their vocation will be tested at a diocesan or regional level. Like lay readers they will not be paid, and it will not be possible to transfer to stipendiary ministry. The details are still being worked out, and as I said, plans will be clearer in 2018.

So in the future we will see a more varied mix of ministry, lay and ordained, readers, OLMs, part-time and full-time clergy. Within that, I believe we should begin to explore lay leadership as an appropriate way forward in some parishes.

There are two discussions on our Agenda which have important implications for the future. One is the proposal to amalgamate the Diocesan Board of Mission with the Long-Term Church Committee. Up to now each has been very successful in their respective areas of responsibility – the Board of Mission has focussed on overseas mission, and the Long-Term Church Committee on Mission on our own doorstep. By proposing to bring them together we are being true to the full understanding of what mission is – the reaching out in the name of Jesus Christ to our neighbours, whoever or wherever they may be.

The other issue is our conversations with the Diocese of Tuam, Killala and Achonry, in which we have been engaged for a couple of years. They were prompted by the work of the Commission on Episcopal Ministry and Structures, which as far as the dioceses in the South and West of this island are concerned, quickly became a discussion about the size of dioceses and diocesan boundaries. A report is before you, and I intend to ask your permission to bring a motion before you on this important issue for our future.

It is now over a year ago that Archdeacon Gordon Linney and Canon Cecil Hyland presented their report Forward Together to this diocese and Synod. We’ll hear more about progress towards its implementation, and there is a chart to show what has already been done.

You have a Book of Reports before you – a complicated document packed with information, which we will work through today. Behind this is an enormous amount of work by countless numbers of people who serve our parishes and diocese in a whole variety of ways. We are very grateful for all they do for us. Personally I wish to thank our two Archdeacons and our Dean for the support they give to me. It is impossible to quantify all that our Diocesan Secretary, Yvonne Blennerhassett does for the effective and efficient running of the diocese, and we are truly grateful to her and wish her a full and speedy recovery from her period of ill-health.

Teamwork is the hallmark of this diocese. So in the name of God, let us begin the work of Synod. 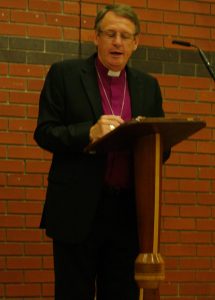