On the last Sunday in August, the town of Waterville held its annual Charlie Chaplin film Festival, which ends with a special ecumenical service in St Michael’s Church led jointly by P-in-C Michael Cavanagh and PP Fr. Gerard Finucane, accompanied by the man himself! Charlie spent many holidays in the town, which holds him in high regard, not just for his ability to amuse and delight. (In WWI, his films were shown in field hospitals to ‘cheer the boys in their recovery’, and sometimes cardboard cutouts of the little tramp were waved high above the trenches to great amusement on both sides!). He was also a man who held fast to his beliefs, using his fame to promote a message of peace and humanity. The final speech of the Jewish barber in ‘The Great Dictator’ rings as true today as it did in the darkest days of Nazi ascendancy.

“I’m sorry, but I don’t want to be an emperor. That’s not my business. I don’t want to rule or conquer anyone. I should like to help everyone – if possible – Jew, Gentile – black man – white. We all want to help one another. Human beings are like that. We want to live by each other’s happiness – not by each other’s misery. We don’t want to hate and despise one another. In this world there is room for everyone. And the good earth is rich and can provide for everyone. The way of life can be free and beautiful, but we have lost the way… …Let us fight to free the world – to do away with national barriers – to do away with greed, with hate and intolerance.” 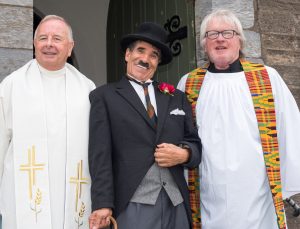