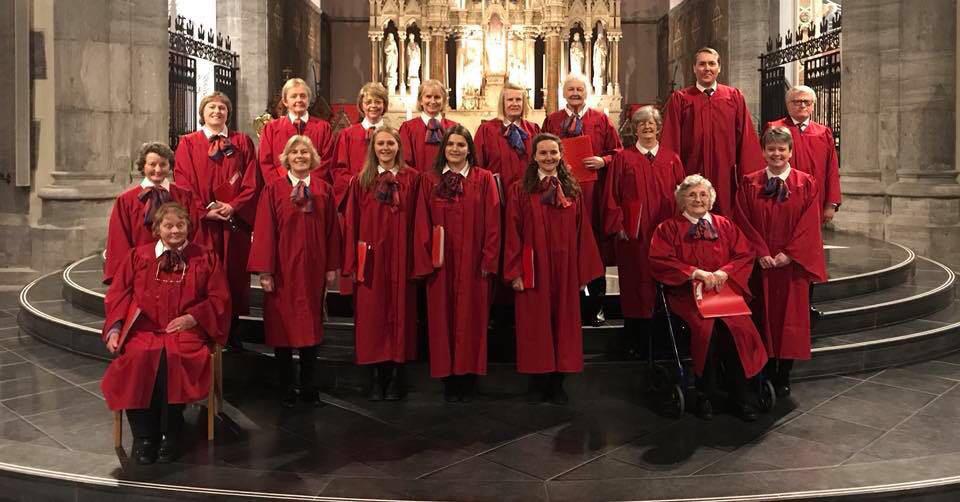 In the Diocese of Killaloe, the Nenagh Union has three churches in Killodiernan, St Marys, Nenagh and Templederry and members from each of these parishes come together to form the Nenagh Union Choir.

Rosemary Smyth, whose husband is Rector of the Nenagh Union, is currently the Director of the Choir which has 18 adult singers including the oldest member, Marjorie, who will be 90 this year. Marjorie has been in the choir since she was nine years old and has great tales to tell of coming to church with her family by pony and trap!

The parishes also have a Senior Girls’ Choir with eight teenage members, as well as a Children’s Choir which rehearses prior to major Services such as Confirmation, Christmas, GFS Enrolments etc.
Nenagh has just had an Advent Carol Service, and a Service of Nine lessons and Carols where the combined choirs totalled 35 in number with ages ranging from 4 to 89!

The choirs sing a broad range of music, from Plainsong and Taizé, to living composers such as John Bell and Bernadette Farrell. They also sing a simple setting of most parts of the Eucharist, and they find that the congregation is now heartily joining in with the Gloria and plainsong responses in the sursum corda!
For the past two years the Union Choir has competed in Limerick Choral Festival. On both occasions they were awarded first place in the hymn singing category, and second place in the part-singing section. They also received a highly commended in the plainsong section!

They have also sung Choral Evensong in Killaloe Cathedral.

Being a Union of Parishes means that they only have the full choir present in St Mary’s, Nenagh on certain Sundays in the month as choir members like to attend their own local parish church. This inevitably means that Rosemary, who is also the organist, has to rush off from one service to the next, making it impossible to rehearse with children on a Sunday after church.

Rosemary says that they only have two men in their choir. One tenor, and one bass who happens to be the Rector, so that can be interesting if they are trying to sing a sung part of a service and the bass part is coming from a different part of the church!

The Choir is a great bunch of enthusiastic and interesting characters all keen to do their best and make music to the glory of God.