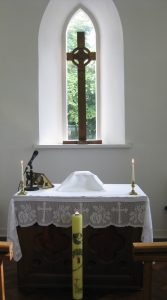 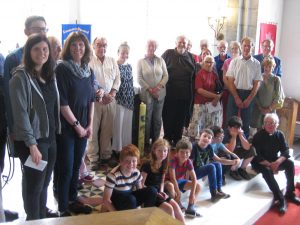 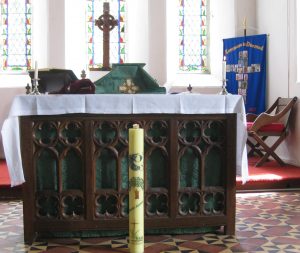 On Sunday 22nd July, The Church of the Transfiguration, Sneem and St Patrick, Kenmare hosted the Climate Justice Candle in special services as part of their progress towards the objectives of Eco-congregation Ireland. The regular congregation was joined by visitors from the US, Germany, England, Greece and Limerick, illustrating the fact that we are one family under God, all with an equal share in the responsibility to nurture and protect His beautiful creation.
Priest-in-charge Michael Cavanagh gave an example of the issues we must address from the week’s news, when the luxury goods manufacturer Burberry announced that they were to destroy around £30million of their products ‘in order to preserve the exclusivity of their brand’. This followed on from recent stories describing the owner of Cartier watches and MontBlanc stationery declaring that they had destroyed some £430million of their own goods for the same reason.
Irrespective of the utter waste, he wondered how the craftsmen and women who created such superb quality work felt, knowing that their skill was considered of no value compared with the need to maintain profits. And how then must God feel when He sees His own creation abused and treated as disposable in the name of economic ‘growth’, with warnings about climate catastrophe and social disintegration ignored for the sake of financial gain?
The issue is not new, he continued; exactly the same careless overconsumption is recorded in the Book of the prophet Jeremiah, and it is inevitable that the same outcome will result, with warnings ignored as ‘fake news’ for the sake of financial gain. In the great scheme of things, there does not appear to be much that we, as individuals, can do – decisions are made at governmental levels by those least likely to suffer the consequence, with the poorest being the ones who will feel the pain. It seems likely that the motive for addressing climate change will be primarily economic, with technology seen as the way to salvation, at least for those who will be able to afford it.
But that will not be the answer, and we can make a difference. Einstein didn’t actually say ‘Insanity is doing the same thing and expecting different results’, but it’s true nonetheless. What happened to Judah and its leaders will happen again; and it is again only God who will be able to come to our rescue. This is the covenant I will make with the people of Israel after that time,” declares the LORD. “I will put my law in their minds and write it on their hearts. I will be their God, and they will be my people. (Jer 31:33)
The permanent answer to Global warming and Climate change is not technology, or indeed any man-made solution – neither should our motivation be economic or nationalistic. It is by each and every one of us having the heart and mind of Christ, and making social justice our first and highest priority. If we seek to serve rather that to be served; to care for the poor and dispossessed; to put our efforts into creating a society where every part of God’s creation is equally valued; to truly love our neighbour as we love ourselves – then all the rest will follow.