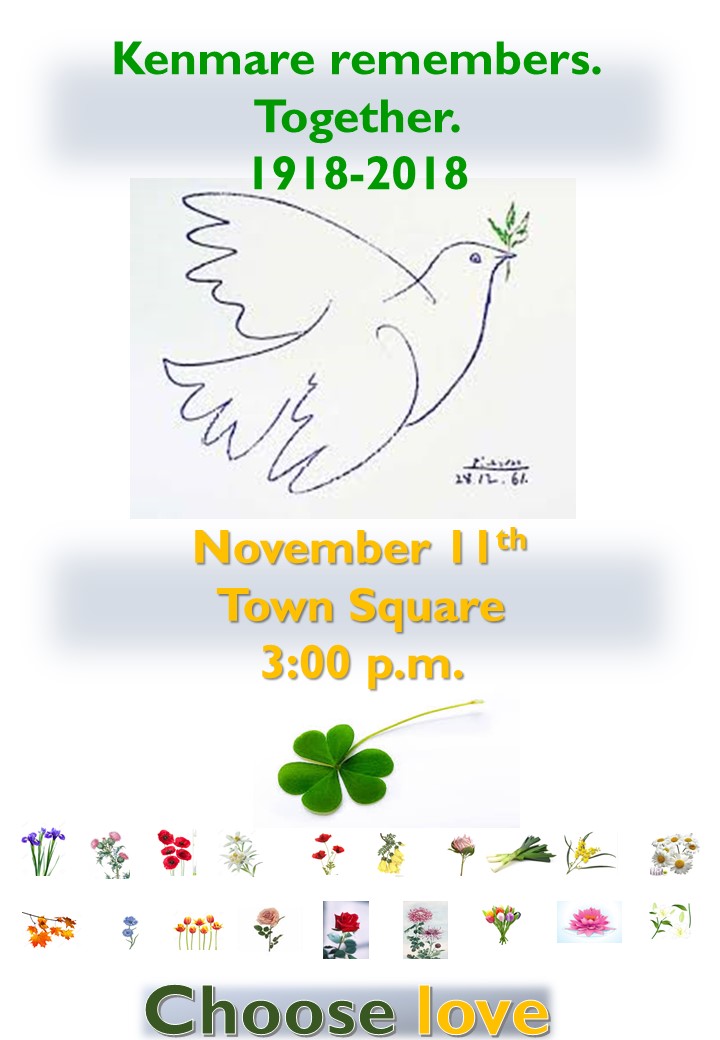 At 3 o’clock on the afternoon of November 11th 2018 , the town of Kenmare will be remembering what happened exactly 100 years ago on that day. After four years of World War, and 7 million civilians and 10 million military personnel killed, an armistice was signed between the various opposing sides. That doesn’t mean that the war ended. Armistice actually means that a formal, but temporary, agreement has been signed by the various sides to stop fighting – basically a cessation of hostilities while an attempt is made to negotiate a lasting peace. And as we now know, for a number of reasons, that peace ‘lasted’ little over 20 years, and was followed by an even more vicious conflict that killed 50 to 55 million more, both civilian and military.

The violence didn’t even end then – in the last 100 years, the world has never known a day when people of different nations have not waged war with their neighbours. The tragedy deepens when conflict is between countries who once enjoyed peaceful co-existence; made even worse by unforgotten memories, guilt and refusal to forgive between people from countries who are notionally at peace.

My Grandad was killed in WWI – as were the Grandparents of so many people in this town, of many different nations. They may have fired the shot that killed him. Or perhaps it was the other way round.

Are we blind, or merely just stupid, not to realise that in war there is never a ‘lasting’ victory? At some time in the future, we know we shall be reconciled. Why not now? Are we powerless to help bring about the peaceful world we dream of for our children and our children’s children?

I believe not. On the Anniversary afternoon, we shall hear poems and readings in Irish, German, French, Polish, Dutch, English, Friesian, Russian and possibly more. It will not be a religious service, nor a military parade. Just people from different birth countries, children, the young and those not so young, singing and listening. Together.

And we will join hands and show the world that irrespective of country, language, creed, culture and colour, we are one. Please join us.