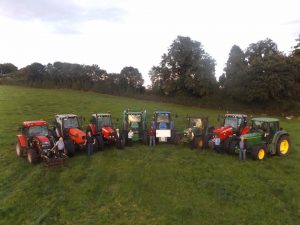 Christ Church Corbally , Roscrea Co.Tipperary
Destination:
Dunmore East, Co.Waterford and back
Is it possible?
On tractors?…yes! of course it’s possible.
Could they do it?
They did it!

Destination Dunmore East Tractor Trip took place over the weekend of Saturday September 23rd and Sunday September 24th. 2017.
Scratching heads, wondering what to do about fundraising, isn’t far from the agenda of many a church. It happened that one man spoke to another man in Christ Church, Corbally, Roscrea Group of Parishes, Co.Tipperary; who had an idea gently simmering away in the back of his mind for years. A couple of months ago, George Draper determined, over many meetings, to bring it to the boil: not another tractor run, but why not… A Tractor Trip. Yes! In rural Ireland, a popular way of raising funds is to hold a tractor ‘rally-type’ event. Generous tractor drivers drive in formation from point A to point B, over some hours distance, showing off an amazing variety of machines. The event ends off with a party.
A tractor trip is quite a different animal. Could they do it? Yes they did it! The Dunmore East tractor Trip in aid of Christ Church Corbally (Timony) parish funds and the Rosemary Project of the Lion’s Club fund … happened.
Eight tractors plus drivers plus support vehicles set off from Timonry (Corbally) Co.Tipperary on Saturday morning, drove to Dunmore East Co. Waterford, at an average speed of forty kph, spent a great night due to the generosity of the people there and drove home, having picked up another twenty or so tractors half an hour from Corbally Church, to a great welcome and an enormous fuel auction and other attractions, to further boost funds.
This tiny, most rural of parishes, mobilised every able bodied person possible and worked tirelessly together; the home crew, the travelling crew, the support crew, the auction crew. Even the prize winning Belgium Blue cow, from the Tullamore Show, owned by Tom Lawless, was present and attracted funds. Did they make money? Hard to get a straight answer out of farmers, ‘tis true, but so far they report €23,000.00 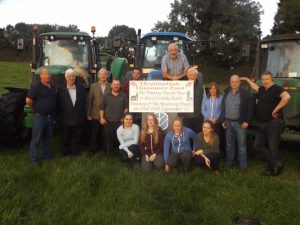